If there’s a body of water present, there may be a North American mink inhabiting the area.

In fact, they're found in Alaska throughout Canada and south including Florida.

Dry areas of the southwest are the only locales where mink doesn’t reside.

With its distribution so large and a stable population, the mink isn’t considered a threatened species.

However, pollution of water sources and changes in wetland habitats due to human population growth can affect some populations causing a decrease. 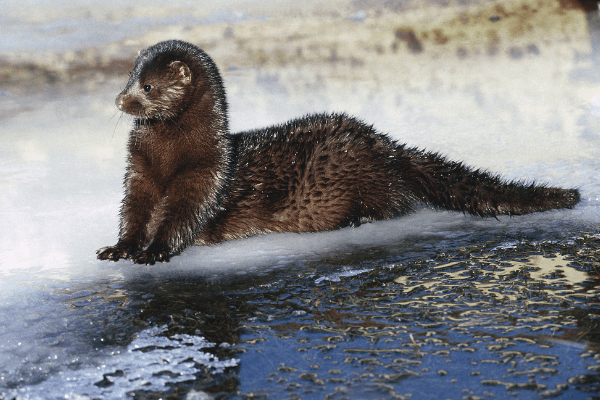 The only mink found in America that is threatened due to changes in wetland habitats and diversion of waterways is a subspecies found in the southern stretches of Florida.

Due to its highly desirable fur, the mammal has been introduced in countries outside its native range.

Due to its similarity in appearance, the North American mink is often mistaken for the European mink.

The main differences between the two mink are the European mink is smaller and has a distinctive patch of white on its chin.

North American mink look very similar to others in their family such as otters and weasels and reside in similar areas.

The mammal has a long, slender body with short stubby legs with webbed feet and a long tail.

The fur is dark brown and there may be a white patch of fur on the throat and chest. 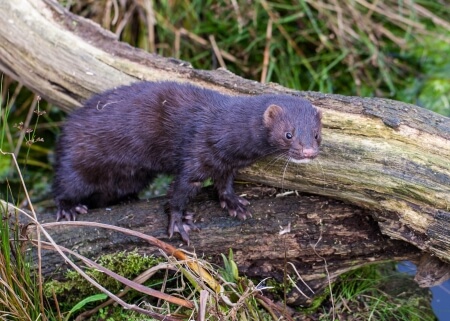 Mink weigh anywhere from 1.5 to 3.5 pounds and can be as long as 2-feet, with males slightly bigger than females.

The glossy fur is water-resistant and thicker in winter than in summer.

The North American mink does not hibernate throughout winter and is active year-round.

Other than during the mating season of February through April, mink are solitary creatures.

Females give birth once each year to a litter of 2 to 10 kits during late spring and early summer.

The kits are born blind and naked and are weaned around 8 weeks of age, when they learn to hunt for themselves.

Their eyes open around 5 weeks after birth.

The kits stay with their family until the fall when they strike out on their own.

Mink living in the wild only live an average of 4 to 5 years.

Domesticated minks can live as long as 10 years.

The mink is a territorial predator and makes its home in densely vegetated areas around bodies of water like streams, creeks, rivers, lakes or ponds, both saltwater and freshwater, where it hunts aquatic prey.

During winter, it may move its home further inland, taking over rabbit dens. 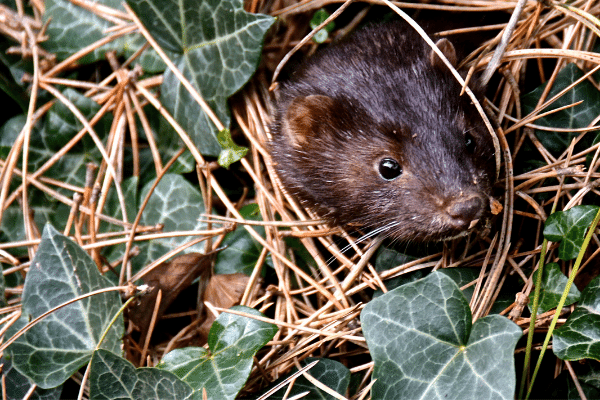 It prefers to occupy a ready-made den such as those made by muskrats or beavers, though it will dig its own burrow.

The mink also lives in burrows under tree roots, rock piles, hollow logs and crevices and holes along stream and creek beds.

Mink can have several burrows located within its range.

However, when winters are harsh, the mink may stay protected inside its den for several days.

The mammal is such a good hunter, in the late 18th Century tamed minks were used as rat hunters around farms and other properties.

They proved to be better at catching rats than terriers and cats.

Minks are skilled swimmers and can dive many feet underwater to retrieve their prey.

Their webbed feet and water-repellent fur make it possible for them to maneuver through the water with little effort. 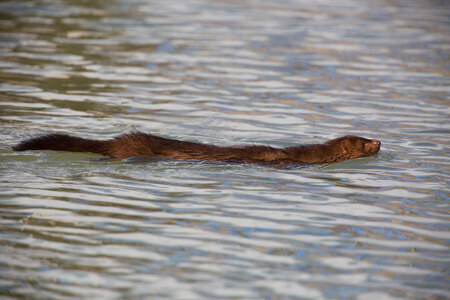 They also use the spray when marking their territory.

Mink combine a hissing with the spraying when feeling threatened.

The mammal usually attacks the prey on the back of the neck making a frenzied kill.

Many times, it will kill more than it can consume and takes the extra back to its den for a later meal.

When taken outside of its native range, the North American mink can have serious impacts on populations of native wildlife.

Even within its native range, the mink’s habit of killing more than it can consume and stealing eggs, can seriously affect native bird populations.

It can also be a frustrating pest to farmers raising chickens or other game birds, killing multiple birds at a time.

The mink will even relocate its den closer to areas where chickens roost or where there’s a man-made body of water to capture an easy and convenient meal.

The North American mink can also be a vector of disease.

However, mink are not known to be aggressive towards humans.