Their unique appearance and horrible smell is enough to make anyone think twice before attempting to catch one in a trap.

However, if you have a skunk living under your porch, deck or the foundation of your home, trapping the skunk is often the best way to get rid of it.

This guide will walk you through every step of the process.

Learn which baits work the best, which trap to use and most importantly, we'll teach you how to remove a skunk from a live trap without being sprayed. 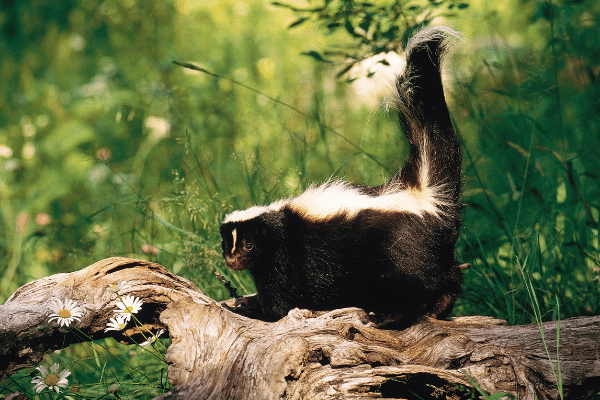 There are 4 different species of skunks that live in North America.

The stripped skunk is the most common species ranging from southern Canada to northern Mexico.

Although not as common as the stripped skunk, the spotted skunk ranges throughout most of the United States and Mexico.

Finally the hog-nosed skunk and hooded skunk are the least common and can be found in parts of the midwest, southeast and throughout Mexico.

Skunks can live in a variety of different habitats.

Hollow logs, old animal burrows and even holes under your homes foundation or porch can offer an ideal living space.

This allows them to easily burrow under buildings or dig for grubs or insects.

Skunks are nocturnal which means they're most active after dark.

It's very uncommon to see a skunk during the daylight hours.

Skunks do not hibernate, however just like many other animals they become very inactive during the cold winter months so seeing one in the middle of winter is not a common occurrence. 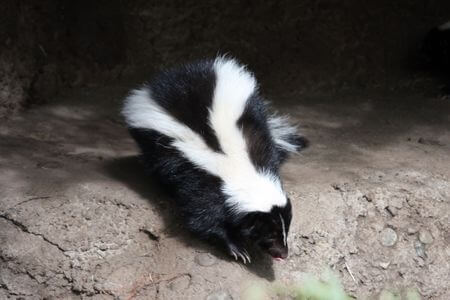 How can you tell if you have a skunk visiting your lawn after dark?

Other than the obvious skunk smell, skunks leave behind small cone shaped holes in your lawn as they dig through the dirt looking for food.

Skunks are omnivores which means they eat both plants and animals, however, they prefer grubs and insects.

Skunks also eat small rodents like mice, eggs (sometimes from your chicken coop), fruits and berries, and even frogs.

What Causes A Skunk To Spray?

Despite what many people may think, skunks only spray as a last resort.

Before they actually spray, skunks will give several other warning signs.

They will shake their tail, stomp their feet, growl and even spit to warn the intruder to leave.

If you don't leave after these warning signs the skunk will lift its tail and spray their foul odor.

This awful spray can reach a distance of 15 feet and the smell can linger for up to 2 weeks.

What's the best way to get skunk odor off your clothing or your pet?

I've had a lot of dogs sprayed by a skunk.

Mix the ingredients in an open container and use them immediately.

The solution can be applied to hair, pets and clothing and works well for neutralizing the skunks odor.

If you've determined you have a skunk living around your home, trapping it yourself using a live trap is one of the easiest ways to get rid of one. 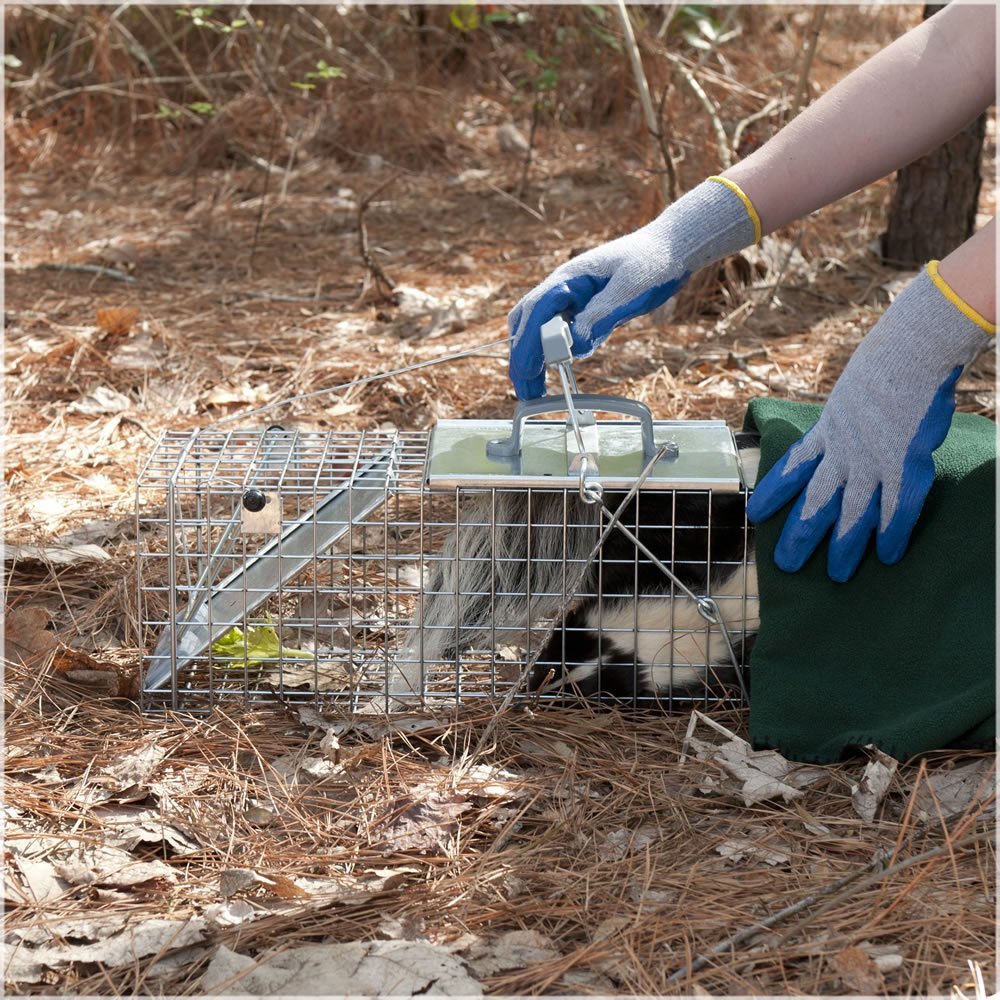 The Easy Set model is great for catching skunks because you can open the door and release the skunk by pulling a leaver located near the handle.

This allows you to open the trap door and let the skunk out of the trap while safely standing at the back of the trap.

The 2 door models have openings at both ends of the trap with a pan trigger in the middle.

The 2 door model makes it difficult to release the skunk while standing in a safe location.

I find the single door trap performs great and I don't see any advantages of using a 2 door trap.

Set the live trap in a location where you think the skunk is living or frequenting.

If you suspect the skunk is living under your porch or foundation, find the spot where the skunk is burrowing and set the trap 5-10 feet away on level ground.

Make sure the trap is set evenly on the ground and the trap does not rock back and forth when the skunk steps into the trap.

You can stake down the trap or place a rock or brick on top to help make the trap sturdy.

A shaky or wobbly trap can scare the skunk.

Since skunks are not picky eaters.

There are a lot of different baits that will work such as canned cat food, sardines or tuna fish.

However, a Dorito chip smeared with peanut butter is by far the best skunk bait I have ever tried. 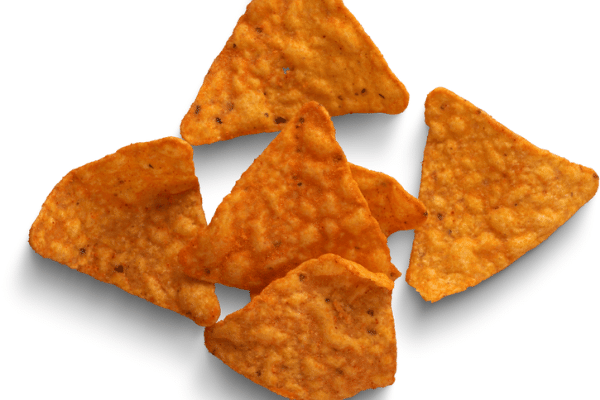 The greasy Dorito chip combined with peanut butter (a food skunks love) seems to be irresistible for a hungry skunk.

When trapping skunks, place one or two Dorito chips with peanut butter in the rear of the trap.

Place the chips behind the pan trigger and centered away from the edges of the trap.

This will prevent the skunk from reaching through the sides of the trap, forcing it to walk into the trap and step on the pan trigger to reach the bait.

Now, how do you release it from the trap?

First, take a blanket and hold it over your body from your shoulders to your feet.

Approach the trapped skunk holding the blanket between you and the skunk.

Since you don't want to startle the skunk, don't try to sneak up on it.

Walk slowly and talk in a low soothing voice to let the skunk know you're there.

Gently place the blanket over the trap, coving the entire trap. 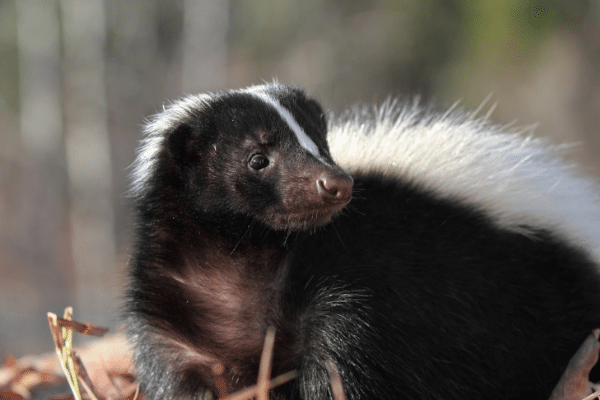 Since skunks generally do not spray things they can not see, the blanket will calm the skunk down and prevent you from being sprayed.

While wearing a pair of gloves, gently pick up the cage using the handle of the trap.

When handling the trap with a skunk inside just be calm and gentle.

It's not a piece of dynamite waiting to explode.

If you move slow and easy, the skunk will not feel threatened and it won't spray.

Finally, depending on your local regulations, release the skunk in a new location at least 10 miles from your home.

I recommend placing a garbage bag or box under the trap so there is a barrier between the skunk and your vehicle.

To release the skunk, pull the blanket back from the font of the trap just far enough so you can reach the release handle.

Pull the release handle which will lock the door open.

Move back from the trap and after a few minutes the skunk will walk out of the trap on its own.

If you're having a problem with a nuisance skunk, consider trapping it yourself using a live trap baited with a Dorito smeared with peanut butter.

The combination works great for trapping skunks, and it saves you from hiring an expensive professional to do the job for you.