A rabbit burrow is an underground system of tunnels which run in several directions and contain nesting areas, runs and emergency exits.

Since rabbits are social animals and often live in small groups, it's not uncommon to find a group of rabbit holes or burrows linked together in a small area.

This underground tunnel system is called a warren.

Rabbits live in a wide variety of habitats and burrows can be found almost anywhere. 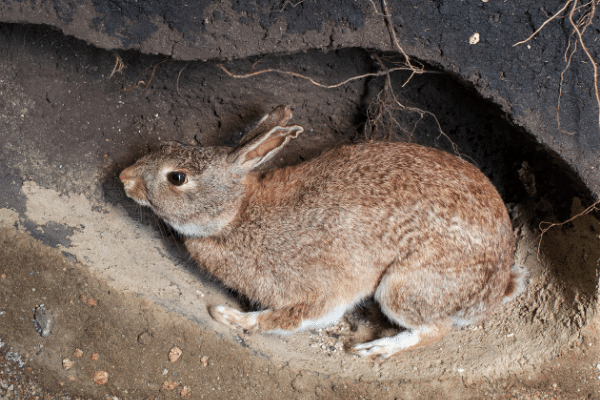 Woods, forests, grasslands, meadows and even deserts are all common places to find a burrow.

However, even though there are 8 different genera in the species classified as rabbits, not all rabbits live in burrows.

While the most common type of rabbit, the European rabbit live in burrows, other rabbits like the cottontail or hare typically live above ground in small nests and do not live in groups.

Rabbit vs Hare - What's The Difference?

Even though their diets are similar, a rabbit is actually different than a hare.

Hares do not live in underground burrows and typically build a small nest above ground in a small depression.

They are born with hair and their eyes are open which allows them to protect themselves soon after birth.

This is different from a rabbit which is born hairless and with their eyes closed.

Hares are also bigger than rabbits, have larger ears and have not been domesticated.

Since rabbits are prey to a variety of different predators, they usually only come out of their rabbit burrow at dawn or dusk. 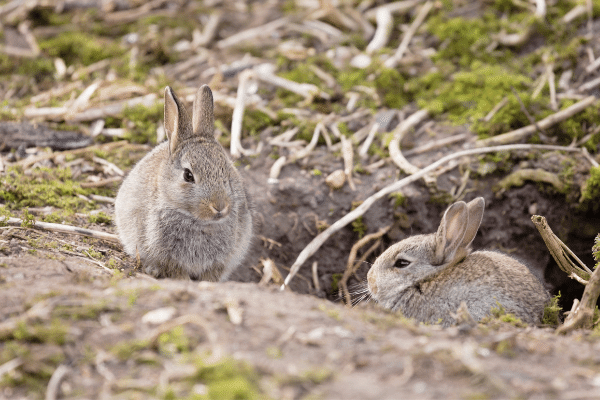 When out of the burrow, they feed nearby on grasses and other vegetation but they're never far from the burrow entrance.

Rabbits also have a very wide field of vision which helps them see in multiple directions including a possible threat from above.

When danger is observed, a rabbit will sit motionless then warn other rabbits with loud thumps on the ground.

Other defense mechanisms include running in a zig zag pattern, biting with their sharp teeth or kicking with their powerful legs.

If you're seeing a lot of rabbits in your yard or around your garden, chances are there's a burrow or warren nearby.

Once you locate the burrow you can decide whether or not you want to take additional steps to either trap them or use a rabbit repellant to deter them from your yard or property.