Trapping squirrels is the best way to remove them from your home, yard, attic or barn.

Although they're cute and fun to watch, these small curious animals can become a big problem.

Why do they like to invade the area in which we live?

Easy, we provide them everything they want and need to survive.

A nice warm attic for raising their young and a nearby bird feeder full of one of their favorite foods is hard to resist. 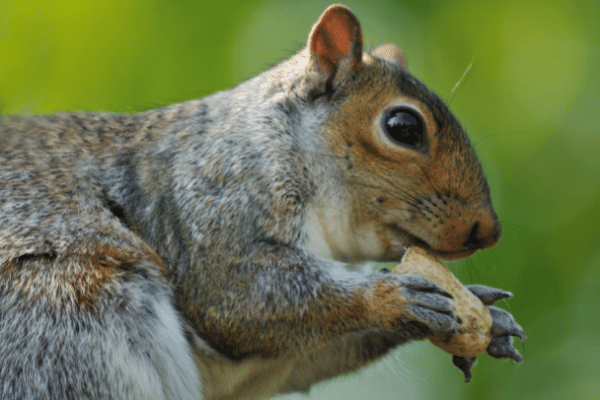 Once a squirrel has decided to "move in" your best option to remove it is by trapping the squirrel.

You can do this two ways.

First, you can call a professional exterminator or if you're a do it yourself person you can easily trap them on your own!

One of the first steps to a squirrel free home is early prevention.

Move bird feeders at least 20 feet from your home and store the bird seed inside a metal, animal proof container.

A metal garbage can with a metal lid works great.

Remove any low hanging branches that are close to your house.

Squirrels use these as a highway directly to your roof or soffits.

Repair any cracks in your homes siding or foundation with a metal plate, hardware cloth or cement.

Avoid using any plastic material that the squirrel can just chew through. 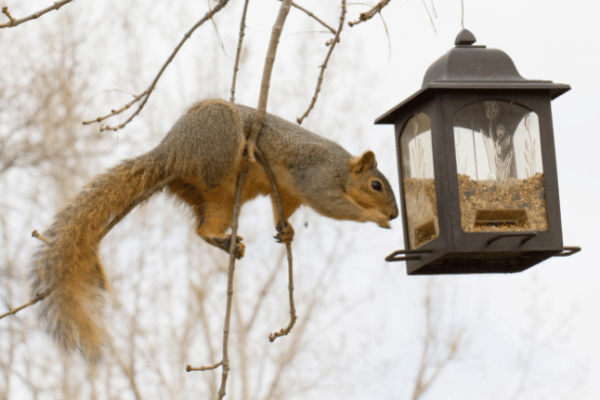 Step back and take a look at your home and yard.

Look for anything that's going to entice the squirrel and simply remove it.

Do you have a woodpile near your house?

Pet food that just sits outside, or a garbage can with no lid?

These are all things that attract squirrels.

Okay, so you have a resident squirrel in your house, now what do you do?

The easiest and most effective way to remove an unwanted squirrel is by trapping.

Many people consider trapping squirrels with snares or other similar devices, but the most effective trap is a live animal trap.

First, it's easy to use!

Simply bait the trap and set the pan trigger and you're done.

No dangerous jaws on the trap or pinched fingers.

Second, you have the option to relocate the squirrel after you trap it. 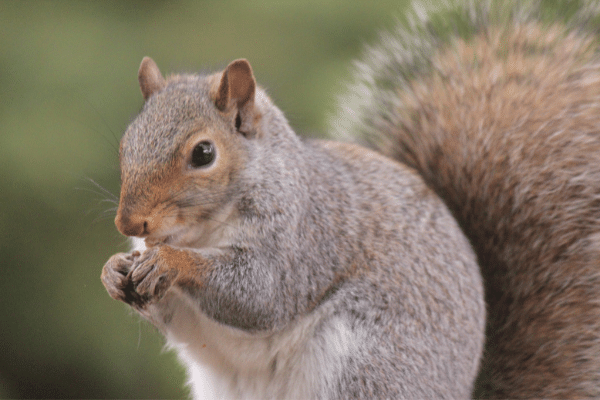 Plus, if you accidentally catch an unwanted animal it can easily be released.

Before you start trapping squirrels, check your local laws to see what is legal.

Some states prevent relocating the squirrel because they can spread disease.

If you do relocate the squirrel, take it at least 5 miles from your home and release it in a wooded area that's away from other houses.

Depending on your preference, you can euthanize the squirrel if it's allowed by law.

Before you trap a squirrel from your attic consider the time of year.

Female squirrels give birth to a litter of 3 squirrels (sometimes 4) in the early spring and sometimes again in the fall.

If you trap the mother, the young will eventually die inside your attic causing a moral dilemma and an unpleasant odor.

If you have a mother squirrel and her young inside your attic you have a few options. 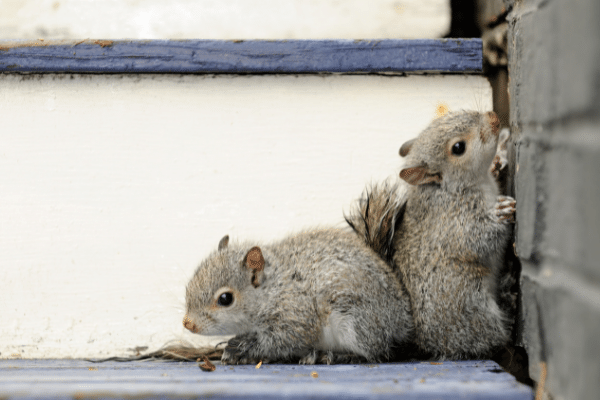 First, you can wait a couple weeks for the young to mature.

They might move out on their own or you can trap them when they are older.

Second,  you can trap the mother squirrel then go in the attic and locate the nest.

Once you find the nest, remove the young and release them with the mother.

If you turn them loose at the same time the mother might run off at first, but she should come back for her young and take them to a new home.

Use a live trap that's made for a squirrel or similar sized animal.

Using a trap that's to small won't work because the doors will hit the animal and not completely close allowing it to escape.

Choosing a trap that's to big won't work because a small squirrel will not be heavy enough to activate the pan trigger.

Havahart produces a well made trap that's used by many professionals. 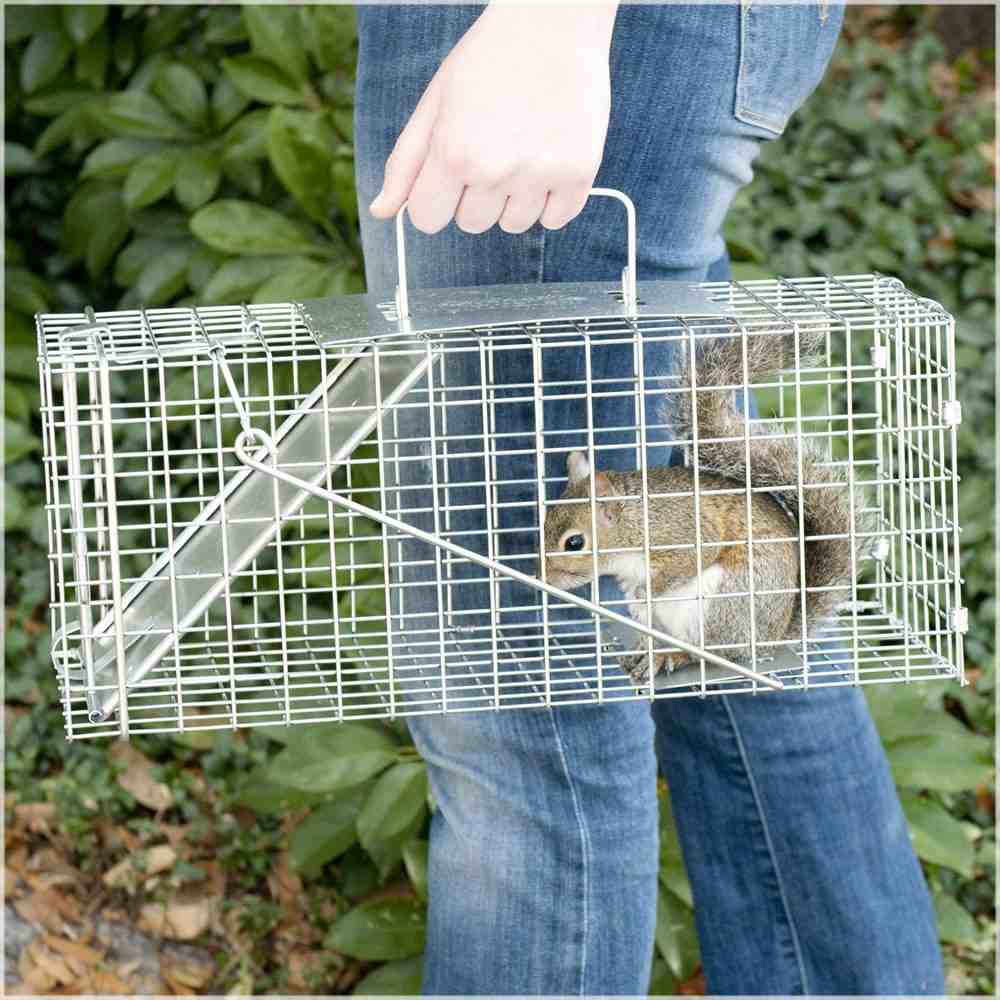 Setting the trap is easy.

Simply place the trap in an area that's frequented by the squirrel.

Your attic, your barn, or outside in the squirrels pathway are all good options.

Bait the live trap by smearing some peanut butter on the pan trigger and then place a little more behind the trigger.

Next, place some bird seed or peanuts (still in the shell) on the peanut butter.

You can also sprinkle a little seed at the entrance of the trap to help entice the squirrel inside.

When setting the trap make sure the trap is solid and it doesn't rack back an fourth.

If the trap rocks while the squirrel enters it could scare it away.

Once the trap has been set make sure to check it frequently to see if you've caught anything.

Trapping squirrels is easy and can be accomplished by anyone if you follow these simple guidelines.

So go ahead and give it a try!

You might be surprised how easy it is to get rid of them yourself.