Get Rid Of Wasps

If you’re looking for tips on how to get rid of wasps around your home, garden, or pool this summer, you’ve come to the right place.

Lots of people get bees and wasps confused.

However, while both can be irritating pests to deal with, there are several differences between the two.

For one, bees feed their larvae pollen, while wasps feed theirs with insects.

So while bees are useful pollinators, wasps can be beneficial for another reason - they control populations of other pests that might want to get into your home or destroy your plants.

In fact, some farmers and gardeners even use wasps to protect their crops!

That said, wasps are also known to inflict a painful sting - a sting to which some people have life-threatening allergies.

Here are some tips on how to get rid of wasps so that you can enjoy your home and backyard this summer.

Why Are Wasps A Problem?

Wasps, which are flying insects with two pairs of wings and pinched waists, can range in color from black to metallic blue and green.

They can be as small as a few centimeters or as long as a couple of inches.

Wasps tend to make their nest in places like gutters, eaves, and soffits.

They’re attracted by plant life, flowers, and other garden areas, where they find plenty of insects to feed upon. 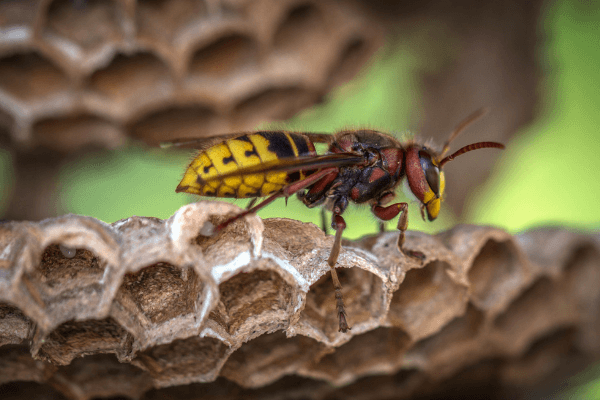 However, they can also be drawn to outdoor eating whereas where they feed on crumbs or other human-related messes.

Wasps aren’t inherently a problem - after all, they control a wide variety of insect pests.

They won’t usually bother humans, but if they’re threatened or disturb in any way (something that’s tough to prevent if they’re flying close to your outdoor areas), they will sting.

Wasp stings are rarely life threatening, but are incredibly painful which is why many homeowners want to get rid of wasps.

Get Rid Of Wasps - Signs Of An Infestation

Signs of a wasp infestation can vary.

However, you’ll usually know you have a problem when you start seeing larger populations of these pests than normal - or when you find them flying way too close for comfort.

Sometimes, you may spot the nests as they are erected around your home or outdoor areas.

Locating a nest is pretty easy if you pay attention to where the wasps are coming and going from your house.

The nest could be behind some loose soffit, under your deck or in a variety of other places.

Just look for multiple wasps entering or exiting in the same spot and that's probably where the nest is located.

Locating the nest will make it much easier to get rid of wasps because that will allow you to tackle the root of the problem.

How To Prevent Wasps

If wasps are getting into your house, the easiest way to keep them out is to bolster your security!

Take a thorough walk through your home and take note of any cracks and crevices.

Wasps can get in around siding or even where electrical utilities enter the home.

Seal up any cracks or crevices with caulk and be sure to patch any holes in window screens. 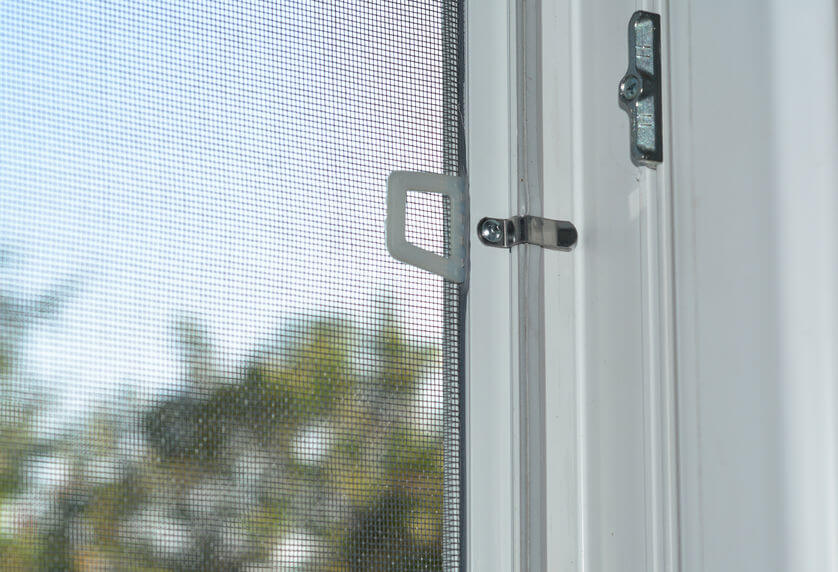 You can do this at any time during the year, but the best time is in the late autumn, after most of the worker wasps have died off.

You can also do it early in the spring before nests become active.

Do your best to keep your trash under wraps.

Wasps are attracted to properties that have plenty of food for them to snack on - often, this is in the form of exposed garbage or compost.

Make sure all trash can lids are tightly sealed.

How To Get Rid Of Wasps

In order to get rid of wasps it's important to understand what kind of creature you are actually dealing with first.

Sometimes, it can be helpful to contact a certified pest control professional before you engage in any kind of treatment on your property.

This is because wasps are commonly confused with honeybees, important pollinators whose populations are in sharp decline.

Furthermore, there are several species of wasps inside the broader “wasp” family.

Treatment is a bit different depending on the species, so it’s crucial that you know your stuff.

The best time to treat for wasps or remove wasp nests is at night, when these pests are less active.

If you can, wait until the sun goes down to implement any of the measures we’ll tell you about in this article. 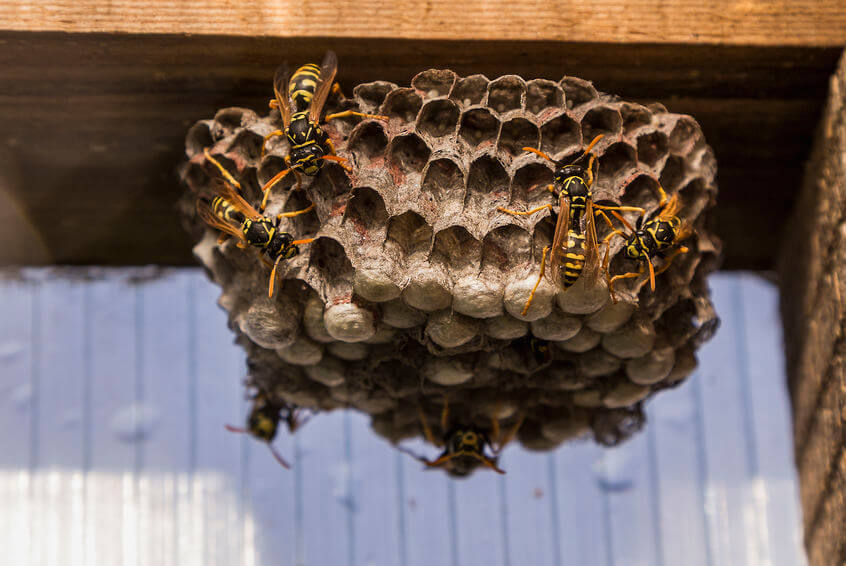 The wasps aren’t guaranteed to be chill, but they'll be a bit calmer than if you were dealing with them during the heat of the day.

Use a Mixture of Essential Oils

There are several essential oils wasps aren’t particularly fond of.

By combining essential oils like geranium, clove, peppermint, and lemongrass, you may be able to repel wasps from your home and outdoor areas.

Simply mix a few drops of each of these oils with some dish soap and water.

Coat the side of your home where wasps tend to build nests, such as porch roofs and under eaves.

It may be helpful if you target areas that wasps have flocked to in the past.

You might also try making a DIY wasp trap by luring wasps inside a container with an enticing treat, like sugar water.

The ultimate goal in creating a DIY trap is to make it impossible for the wasps to escape.

Cut the top off a two-liter bottle and flip it upside down.

Fill it with sugar water.

You can even make a simple treatment that is as basic as combining two tablespoons of dish soap with water and adding it to a spray bottle.

Theoretically, the soap will clog their spiracles and clause them to die almost immediately.

Physically Remove the Nests And Wasps

If you’re going to remove a wasp nest, you may be best off entrusting this task to the professionals.

They will have the skills, protective gear, and equipment necessary to remove the nests without getting injured. 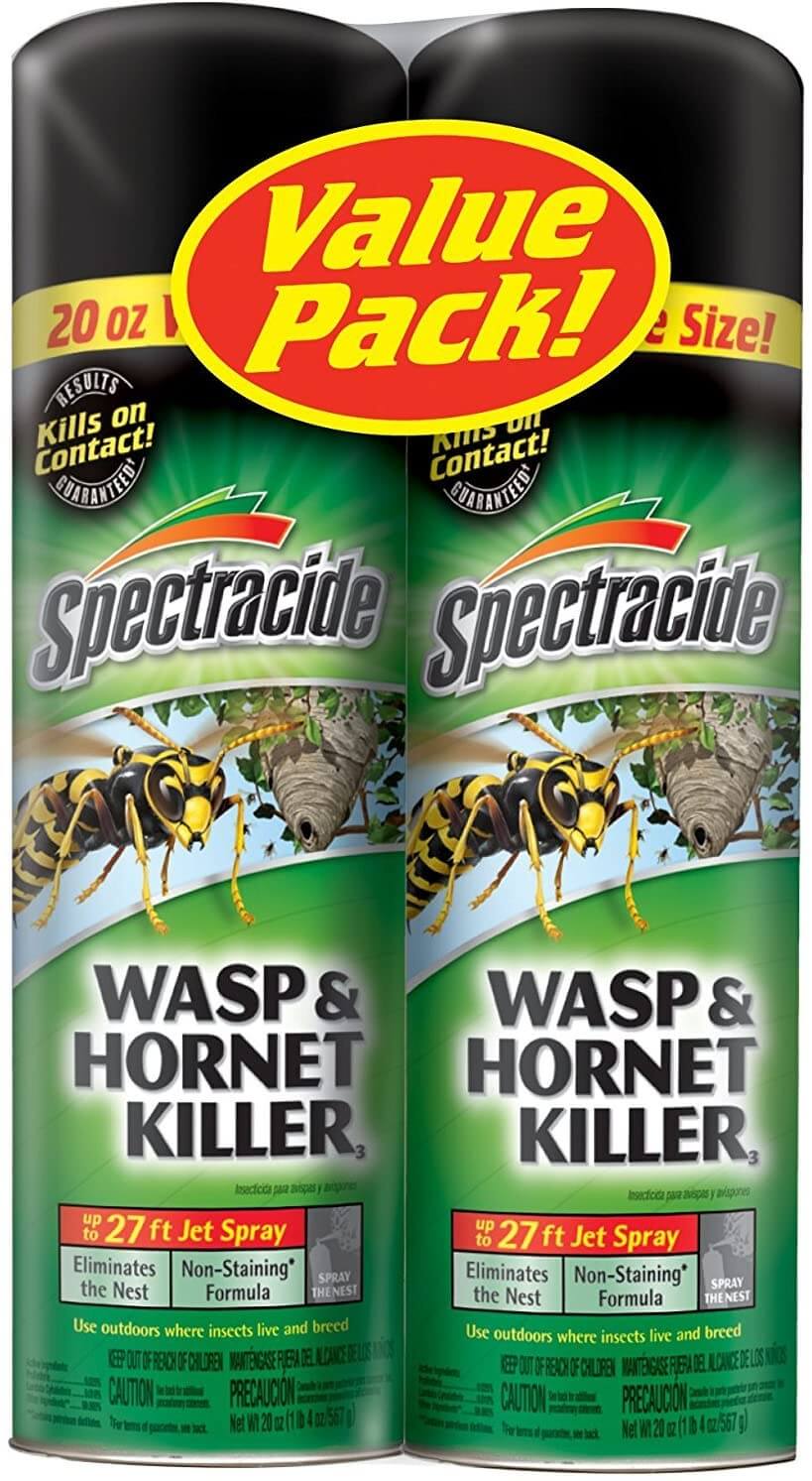 However, if you’re going to remove a wasp nest yourself, make sure you have a thought-out plan and an exit strategy.

Again, you’ll only want to do this at night and you should be sure to wear protective clothing.

Try not to use lights, as this will wake the wasps up and alert them to your movements.

Approach the nest quietly and slowly and use a garbage bag to cover the nest before removing it from its location.

You may want to have some insecticide on hand to spray the nest in case the wasps try to escape the confines of the bag.

Getting Rid Of Wasps - Overall

Wasps can be frustrating pests to deal with, but at the end of the day, most wasps are actually beneficial to humans.

There are several species that help to pollinate while most help control and maintain populations of various insects.

Therefore, it’s important that you do your research about the specific types of wasps that are hanging round your home before you proceed with any wasp control options.