Getting Rid Of Japanese Beetles

Getting rid of Japanese beetles might seem like an uphill battle, but when you’re armed with the proper techniques and knowledge, it’s a simple task.

Luckily, Japanese beetles are a bit less damaging than other kinds of pests because they only emerge and do damage for a few weeks (sometimes a couple of months) out of the year.

Nevertheless, these small pests can wreak a lot of havoc in their short stay in your garden.

Here are some natural methods of getting rid of Japanese beetles so you can salvage your plants - and your sanity - for good.

What Are Japanese Beetles?

Japanese beetles, or Popillia japonica, are small insects that can seriously damage your garden.

These pests don’t usually come into the house, but in the garden, they are indiscriminate feeders.

They are pests for hundreds of different species and cause particular damage to edible crops. 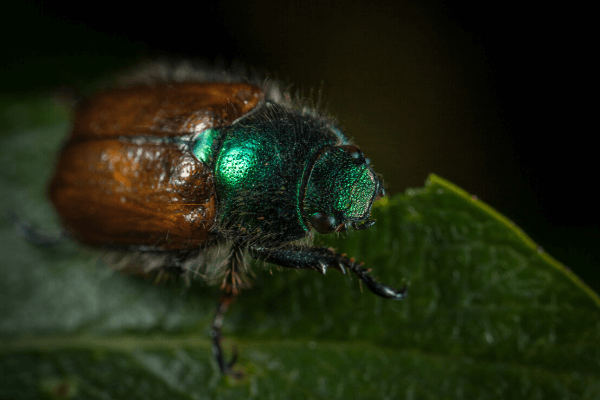 Accidentally introduced to the United States in the early part of the 20th century, these pests are considered invasive in most areas.

About ½ an inch in length with metallic, green-blue heads, Japanese beetles emerge from the soil as adult beetles after overwintering there the previous fall.

Although the average lifecycle of a Japanese beetle is only 40 days, these pests can inflict a ton of damage in a short amount of time.

They are particularly harmful to roses, grapes, beans, and raspberries.

Signs Of A Japanese Beetle Infestation

It can sometimes be difficult to tell if it’s Japanese beetles that are causing the problems in your garden, or pests of another species.

Usually, Japanese beetles will eat most of the foliage on their favorite types of plants.

If your leaves appear skeletonized, which means only the veins are remaining, that’s a good sign that Japanese beetles are around. 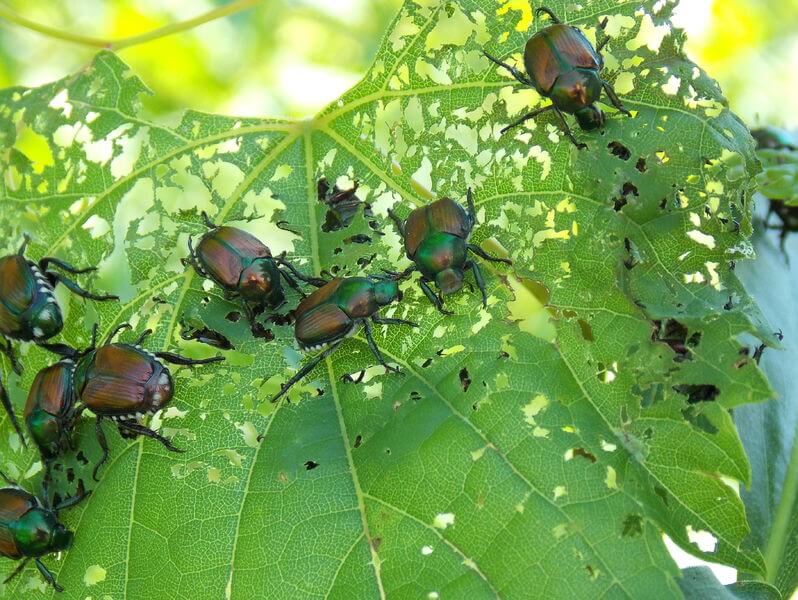 If you notice brown patches in your lawn, that’s another sign of a beetle problem.

The grub version of these pests can seriously damage your grass when they overwinter in the soil.

Steps For Getting Rid Of Japanese Beetles

Remove Them By Hand

Sometimes the best way to get rid of a pest is to engage in some simple, hand-to-hand combat.

In other words, you can get rid of Japanese beetles by removing them directly from the plants.

To do this, just fill a plastic cup about halfway with water.

Add a bit of dish soap to it.

Walk around the garden (usually first thing in the morning, when the beetles are feeding) and remove each bug you find.

Toss it in the cup of soapy water.

Although this isn’t a permanent fix, it can get the bugs off your plants before they can do much damage.

Getting Rid Of Japanese Beetles With Row Covers

If pulling Japanese beetles off your crops doesn’t sound like your idea of a good time, you may want to consider another simple solution - row covers. 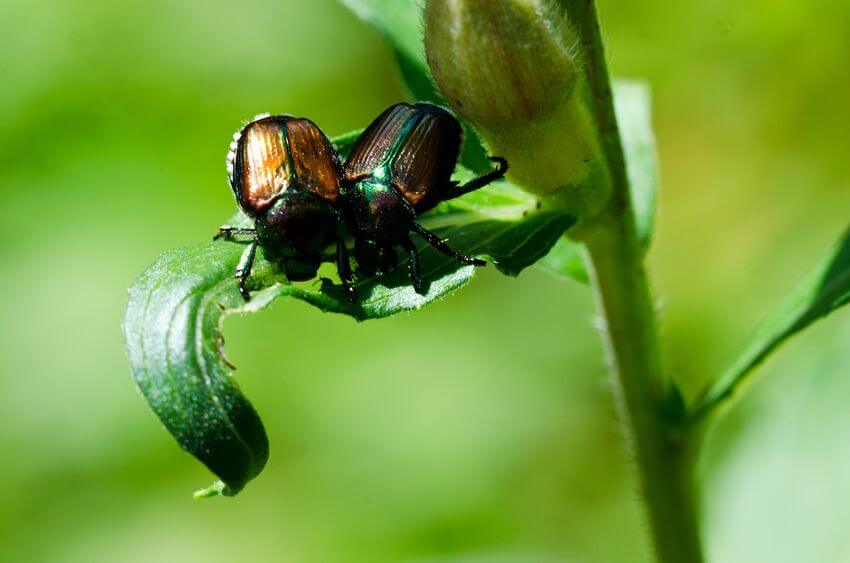 Row covers can be placed over your plants so the beetles land on the plastic covers instead of your vegetables.

The plants will stay protected and you won’t have to worry about the beetles tagging along.

The only downside to using row covers is that you will ultimately need to remove them so your plants can be pollinated (and access water).

However, they’re easy to take off and put back on.

They can also be used later in the season to protect your plants from an early frost.

Neem oil is a natural spray that can be used to repel Japanese beetles.

It doesn’t harm beneficial insects, like bees and ladybugs, but will instead kick Japanese beetles and other harmful pests to the curb. 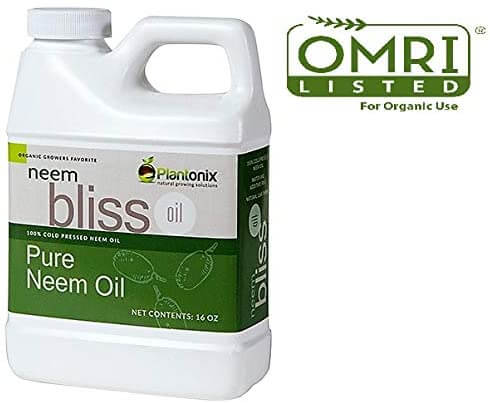 It halts the reproduction process and makes it impossible for the pests to continue wreaking havoc on your garden.

Because Japanese beetles overwinter in the soil, it’s a good idea to rotate your plants each season.

While this isn’t practical for perennial plants, like roses, it can help keep Japanese beetles from harassing plants like beans year after year.

Planting each vegetable in a new location every year is also a good idea to prevent other pests and diseases from affecting your plants, too.

Milky spore is a fungal disease that can be introduced to your soil.

It will only affect Japanese beetle grubs, who will eat the spores when they are underground.

The spores remain viable in the soil for several years, but it takes a few years for them to take full effect.

You’ll need to apply treatment to all the soil within more than a half a mile range too, which can be unrealistic for some people.

Believe it or not, Japanese beetles go nuts for geraniums.

In fact, these flowers attract Japanese beetles like white on rice!

However, when Japanese beetles eat geraniums, they become incredibly sick.

They will get disoriented and fall to the ground.

This can make it more difficult for them to migrate to your other plants for an after-dinner snack.

Enlist the Help of Poultry

If you’re able to keep livestock where you live, you might want to consider investing in a few chickens - or even better, guinea fowl. 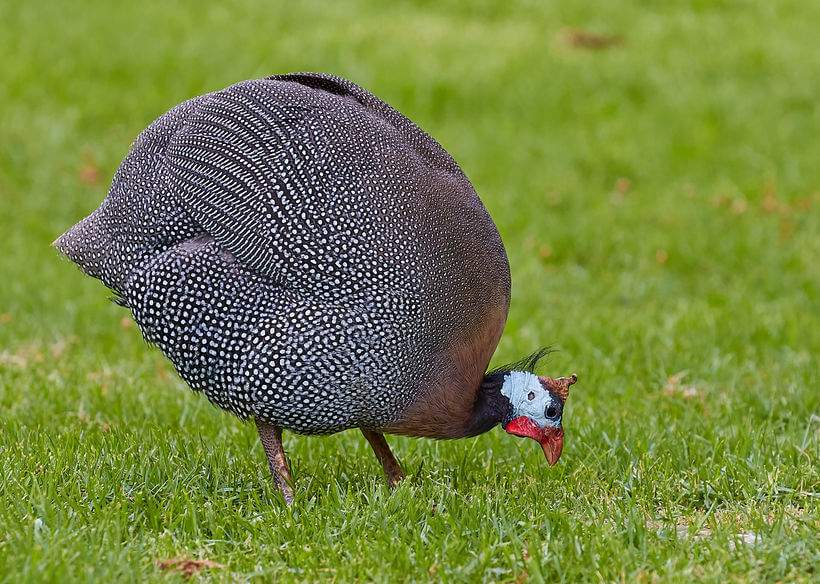 Guinea fowl are large, exotic-looking birds that you raise similarly to chickens.

They are somewhat wilder, however, in that they particularly enjoy grazing on bugs.

Japanese beetles are a particular favorite of theirs.

Guineas can be very loud, so you’ll want to keep that in mind if you have neighbors close by.

Plus, raising any kind of animal is a serious commitment that you should not undertake lightly.

Getting Rid Of Japanese Beetles - Overall

While these natural methods for getting rid of Japanese beetles work well for most gardeners, there are some cases in which a severe infestation just refuses to respond to your best efforts at control.

In that case, you may have to be a bit more aggressive in your treatments.

This insecticide works well against Japanese beetles, but it has to be reapplied.

Ultimately, finding the right way of getting rid of Japanese beetles will take some time - and some patience.

Stick it out, and you can kick these untimely pests to the curb.