Looking for some ideas for pigeon pest control?

You’ve come to the right place.

They might seem cute and whimsical, but the reality is that pigeons can wreak a lot of havoc.

Also known as rock doves, these birds spread a ton of disease and their droppings are problematic in themselves.

What are pigeons and why are they problematic?

Pigeons are small birds, usually less than a foot long and 13 ounces in size. 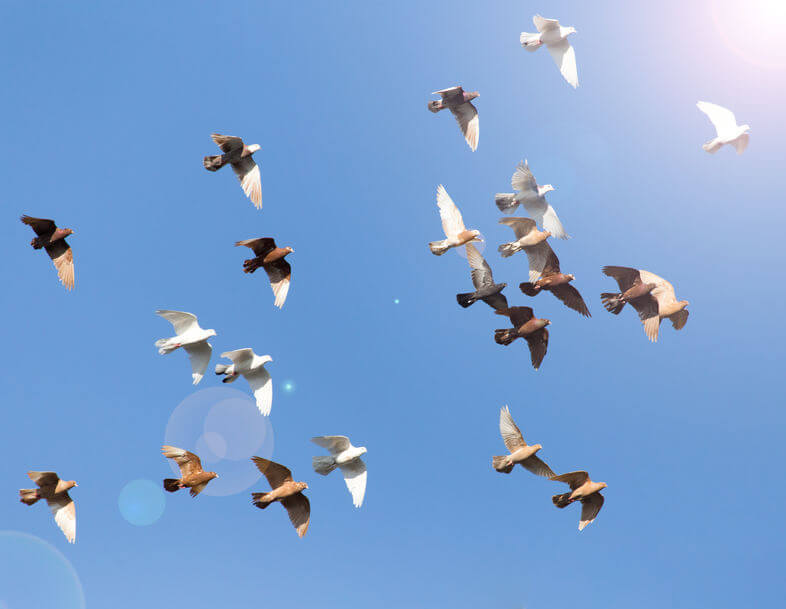 Found throughout most of the United States, these birds are usually gray with white rumps and two black bars on their wing feathers.

They have red feet and mate year-round.

Pigeons eat just about anything, including livestock manure, grains, seeds, and insects.

While they might seem cute and cuddly, these birds are vectors for disease.

Plus, they can spread diseases like toxoplasmosis and salmonella to other birds (including chickens or other poultry, if you have them).

You can also contract these diseases if you come into close contact with the birds or their droppings.

Not only that, but pigeon droppings are messy and can increase the risk of slips and falls on your property.

They are unsightly and can speed up the aging process of structures and materials, too.

The droppings can harbor fungus known to cause histoplasmosis.

Pigeons can even harbor other pests in their feathers like lice, ticks, and fleas.

Just one adult pigeon can eat about a pound of food a week, so if they’re getting into your bird feeders, it can be quite frustrating.

Not only that, but pigeons can transmit up to 50 different diseases and ectoparasites.

Originally wild in North Africa, Europe, and western Asia, pigeons are now also found all over the United States but are mostly dependent on humans to provide them with nesting sites, roosting sites, and of course, food.

They are found in agricultural areas but also can be found in cities near parks, bridges, buildings, and other structures.

They will congregate around feed mills, warehouses, restaurants, and other areas where food is in ample supply. 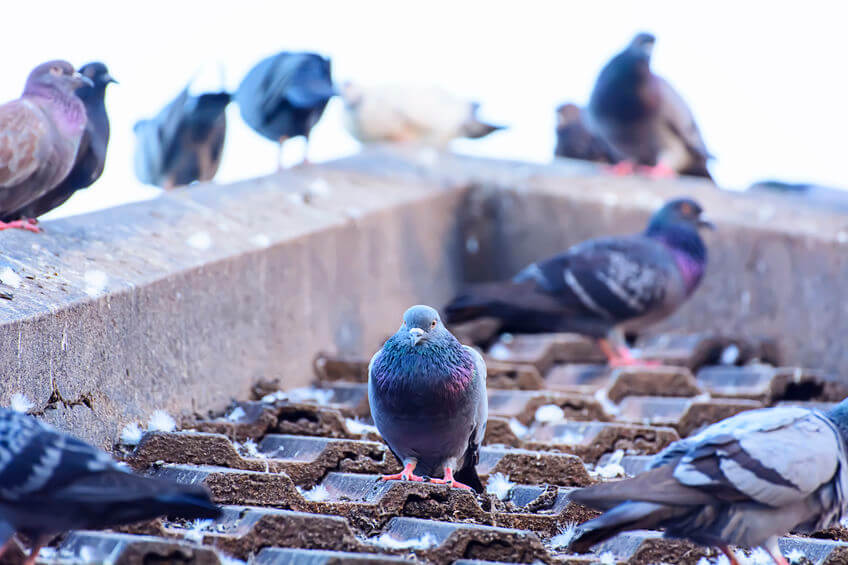 Pigeons are attracted to cities that lack adequate sanitation but also flock to cities because they offer plenty of cliff-style nesting sites on older buildings.

You’ll know that you have a pigeon problem if you see large numbers of birds around your property.

How To Prevent Pigeon Problems

The best way to prevent a pigeon problem from occurring is to make your home and property as inhospitable as possible.

Do your best to fill in voids or slopes that could serve as resting areas.

You can also use things like spikes to prevent landing and roosting in inopportune areas.

Keep all food and water out of the reach of pigeons.

This applies even to standing water, like in birdbaths or in shallow puddles.

Another obvious tip to keep pigeons away is to avoid feeding them, which is easier said than done in an urban setting. 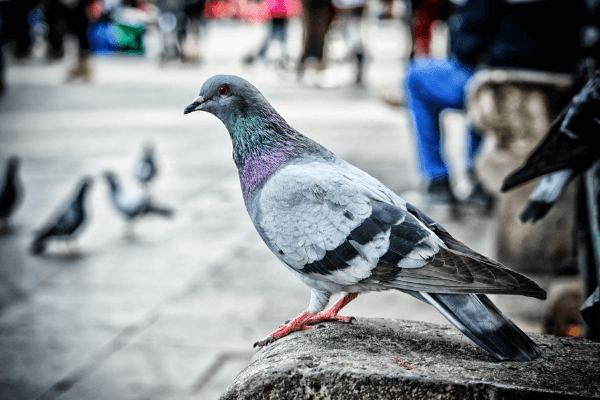 Often, people feed pigeons unintentionally by leaving food out in the open or keeping the lids of trash cans open.

This is a surefire way to attract pigeons along with other types of pests, so make sure everything is cleaned up.

You may also want to consider how you can modify your building to help prevent pigeons from landing.

If you angle building ledges, it can prevent birds from landing on the edges.

You don’t have to redesign your entire home either.

All you need to do is strategically place pieces of sheet metal, wood, or even styrofoam blocks to produce the desired effect.

One way that people attempt pigeon pest control in an organic way is to use “scare devices,” like plastic birds, snakes, or even balloons.

While these work in the short term, the pigeons will eventually get used to their presence and will not be fazed in the slightest.

In addition to preventing pigeons from landing by introducing the structural modifications we mentioned above, you can also use bird netting to keep pigeons out.

It offers good long-term control, as it can be used to prevent pigeons from getting into air conditioning units, overhead pipes, and other sensitive structures.

There are also sonic repellers that can be used to keep pigeons away from open, outdoor areas.

These are commonly used in outdoor areas like parks and plazas where it’s difficult to keep trash at a minimum.

Ultrasonic repellents can also be used in semi-enclosed areas.

Totally silent and harmless to humans, the repellents won’t hurt pigeons, either. 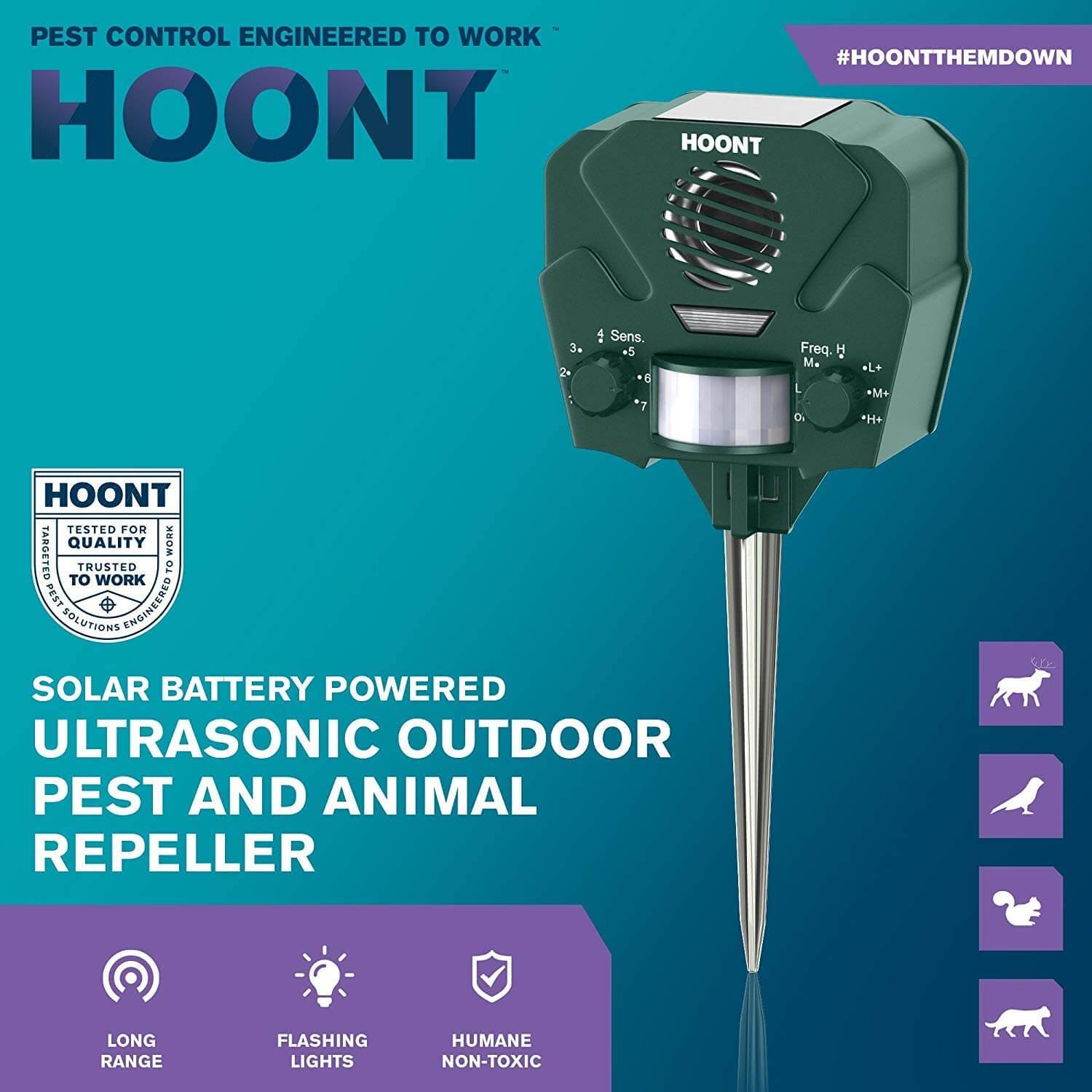 They instead produce a sound that is absolutely abhorrent to the birds, encouraging them to stay far away.

Finally, if you notice a pigeon infestation in your area, make sure you take the time to clean up any droppings.

Don’t leave them lying around.

Starting with a clean slate will not only help you to ensure your pigeon pest control measures are working, but it will prevent the spread of toxins, too.

Pigeons can also be controlled with various repellants, often sold in pastes, gels, and liquids.

These vary considerably in their effectiveness, and you’ll want to consult with a certified pest control professional before applying any of these treatments.

They have the potential to be quite hazardous and often, organic methods of pigeon pest control are much more effective than their chemical-based alternatives. 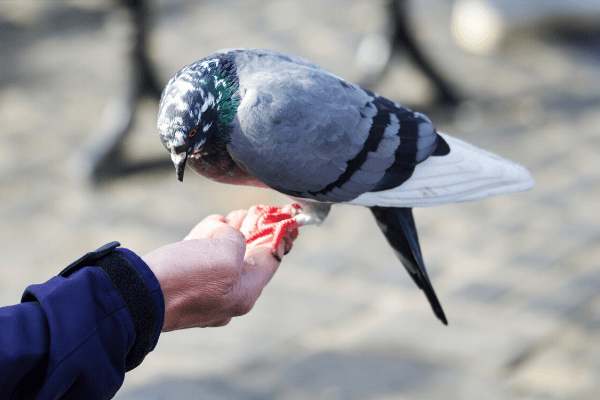 No matter what you choose to do, act quickly.

Pigeons will set up shop quickly, and their presence can be extremely detrimental to your health and the appearance of your home.

They may be ubiquitous in urban areas, but that doesn’t mean you have to tolerate them!

Consider implementing one of these methods of pigeon pest control, and you can rest easy knowing that the classic Hitchcock film “The Birds” isn’t being recreated on your own front lawn!