Making your own homemade yellow jacket trap is cheap and easy to do!

With just a few common household supplies you can build a very effective trap that will help reduce the number of unwanted yellow jackets buzzing around your yard, picnic, patio or even your honey bee hive if you're an avid beekeeper.

Let's face it, yellow jackets are not a very popular insect.

Especially when you drive over an underground nest on your lawnmower and you're stung multiple times from something that seemed to appear out of nowhere! 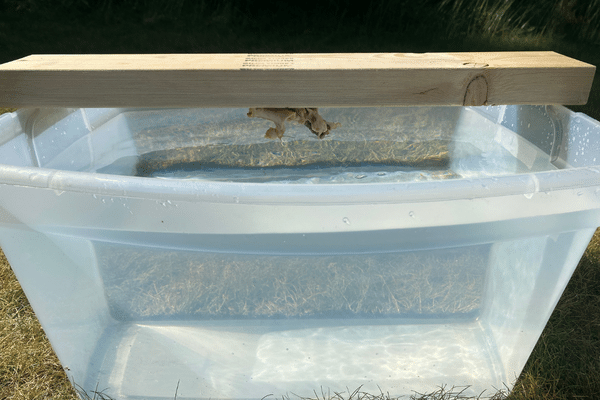 However, yellow jackets do play an important roll in the environment so you don't need to get rid of every single one, you just want to control the numbers so you can enjoy your time outdoors.

To learn more, let's take a closer look at what a yellow jacket actually is, and the best way to get rid of them.

What Is A Yellow Jacket?

Yellow jackets are commonly mistaken for bees, but they're actually part of the wasp family.

These known scavengers love to eat meat, fish and other sugary substances which is why they're such a nuisance around garbage cans, picnics and dumpsters.

For a small number of people, the sting from a yellow jacket can be deadly, especially if you have a severe allergic reaction.

However, for most of us the sting is not life threatening.....just painful.

Unlike a bee that can only sting once, a yellow jacket has a smooth stinger, meaning they can sting you multiple times.

Plus, to make matters worse a yellow jacket will release a pheromone if they're killed. 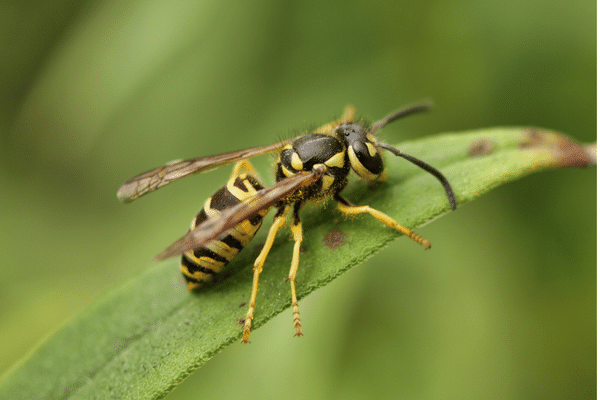 So, if you happen to smash one with a fly swatter or other object, chances are it will draw other yellow jackets to the area.

Are hornets the same thing as yellow jackets?

You'll typically notice the most yellow jackets in the late summer or early fall when their numbers in the colony are the largest.

During the spring, the colony is small, but as the warm summer months progress, yellow jackets become more prevalent and active.

Then, as fall arrives and protein rich food becomes harder to find, yellow jackets become angry and more aggressive as they search for food.

Are Yellow Jackets A Threat To Honey Bees?

A hungry yellow jacket will attack a honey bee hive, eating the bees, their larva and even the honey inside the hive. 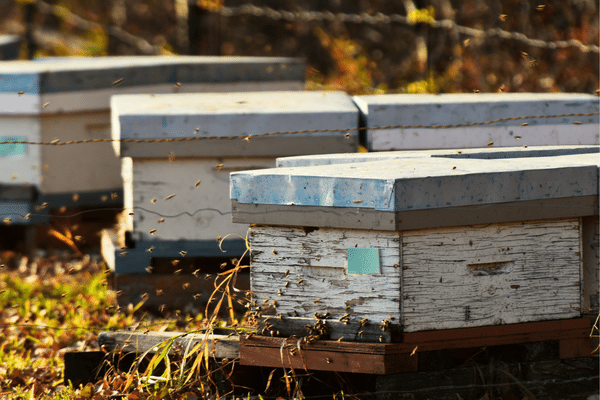 Since yellow jackets remain active in cooler weather compared to honey bees, fall attacks are often very successful and can even take out an entire hive.

However, in the spring when yellow jacket numbers are limited, a healthy honey bee hive can usually ward off an attack.

The Best Time To Make A Homemade Yellow Jacket Trap

When considering the best time to make a homemade yellow jacket trap, there's a few things to consider.

First, if you make the trap in the early spring before the yellow jackets have time to reproduce into a large nest, you stand a good chance of catching the young queen which limits the amount of yellow jackets you'll face later on in the summer.

However, if you don't make your homemade yellow jacket trap until later in the summer or fall when they really become a problem, that's okay.

This homemade trap works great and it's sure to give you the results you need to enjoy your backyard without the threat of being stung by a yellow jacket.

Okay, now that we have a basic understanding of why the yellow jackets are around, let's make a homemade trap to get rid of them! 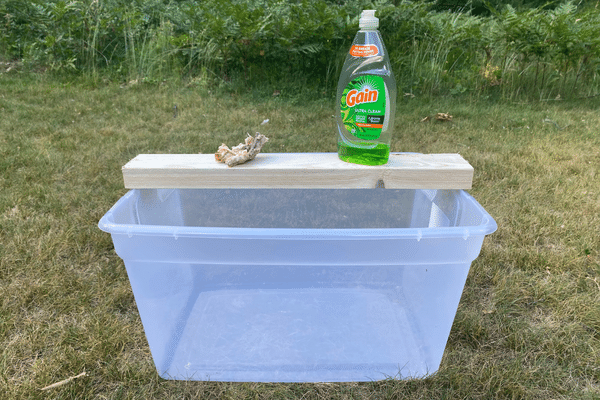 To make the trap you'll need these basic supplies:

Start by taking a small storage tub and find a piece of wood that will span across the top.

A chunck of scrap 2x4 or any other similar type of wood works great.

On the bottom of this 2x4 is where you'll attach the bait. 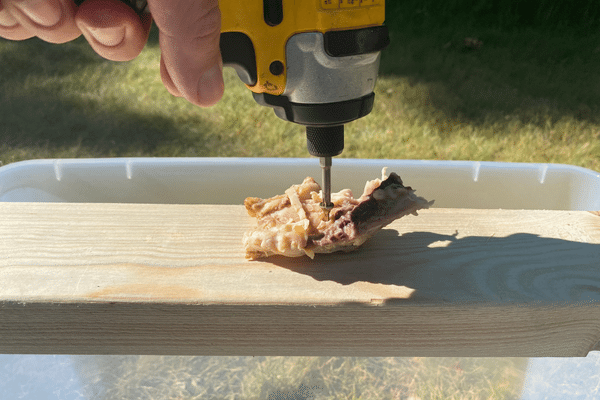 What's the best type of bait to use to attract yellow jackets?

Some leftover pieces of rotisserie chicken work great because you can use the pieces of bone to help secure the bait to the bottom of the board.

Simply take a couple of roofing nails or screws and attach a couple pieces of chicken carcass to the underneath of the wood. 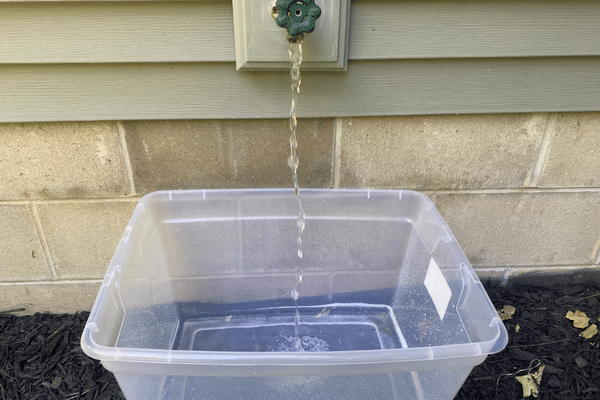 Now, fill the tub up with water until it's about 1 inch below the bait.

Add some dish soap to the water and gently mix it in. 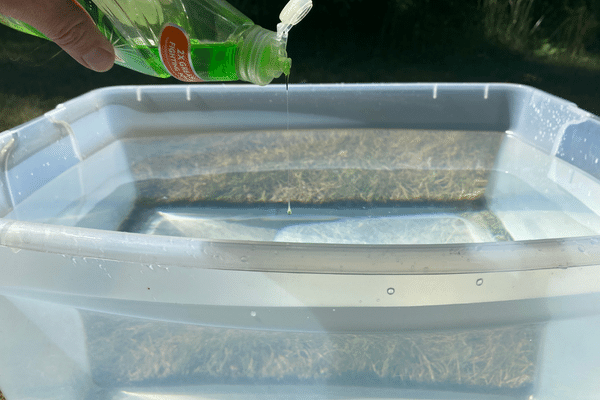 The dish soap changes the surface tension of the water, so when the yellow jackets touch the water, they won't be able to fly away.

Within a few minutes you'll see the trap starting to work.

What Makes This Homemade Trap So Effective?

The yellow jackets love meat and proteins, and they find the chicken nearly impossible to resist.

Once they fly under the board and land on the chicken, they'll grab a large chunk of meat.

As they attempt to fly away the weight of the food they are carrying will cause them to drop down about an inch, touching the water where they'll quickly drown. 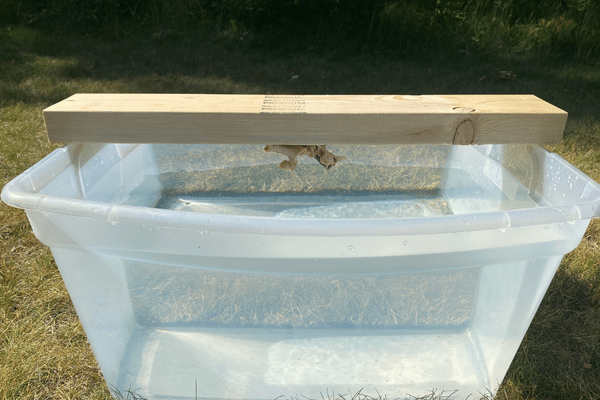 When your trap becomes full, simply dump out the water, add some new bait and you're homemade yellow jacket trap is ready to use again.

Just about everyone has a bad memory regarding an attack from yellow jackets.

They're aggressive, their stings are painful, and since they live underground, they're often hard to get rid of when using sprays or other harmful chemicals.

This homemade trap is simple to make and it works great for trapping unwanted yellow jackets around your home or campsite.

It only takes a few minutes to make, and you'll finally be able to enjoy your time outside without the constant fear of being stung.